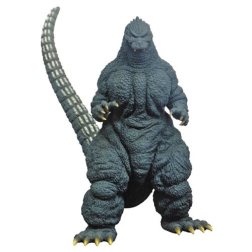 Godzilla Vs King Ghidorah was released in 1991, and was the first film in Toho’s “new era” of films to feature a kaiju from the previous era – King Ghidorah. Godzilla’s evolution continues in this film, as the King of the Monsters continues to get bigger, bulkier, and more powerful. This 12-inch scale figure captures the massive size and intricate detailing of the Godzilla suit from the film.